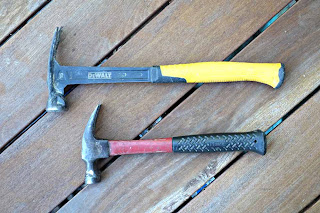 Stopped by to see my long-time friend Jack Fulton last week. Jack is by profession a photographer, also a builder. In the '60s, Jack and I learned a lot about building from Jack's uncle, Alec Fulton. A jovial Scotsman, Alec took the time to teach us novices. Among other things, he taught me how to join cast-iron drainpipes with hot lead (and oakum) — in the days just before ABS and PVC drain pipe replaced cast iron.

Anyway, Jack had just finished rebuilding the entire front wall of his house (termite damage, new continuous foundation), and these well-used hammers were lying around. The smaller has been my go-to tool belt hammer for many years. A Plumb 16" with fiberglass handle. I like the straight, rather than a curved claw: better for de-nailing as well as digging in the dirt. Aesthetically, I like wooden handles, but the fiberglass has a bit of spring in it, which is comfortable.

How to Make Hard Cider

How to Build a Natural Swimming Pool

How To Build Cold Frames E-Handbook

Herbal Remedies For A Lifetime Of Healthy Skin E-Handbook

At MOTHER EARTH NEWS for 50 years and counting, we are dedicated to conserving our planet's natural resources while helping you conserve your financial resources. You'll find tips for slashing heating bills, growing fresh, natural produce at home, and more. That's why we want you to save money and trees by subscribing through our earth-friendly automatic renewal savings plan. By paying with a credit card, you save an additional $5 and get 6 issues of MOTHER EARTH NEWS for only $12.95 (USA only).

×
Hi, thanks for stopping by.  Like to read more content, Join the Mother Earth News Community Today!
This text can be changed
Join Today!

This text can be changed

This text can be changed
×

This text can be changed
Register Today!
×